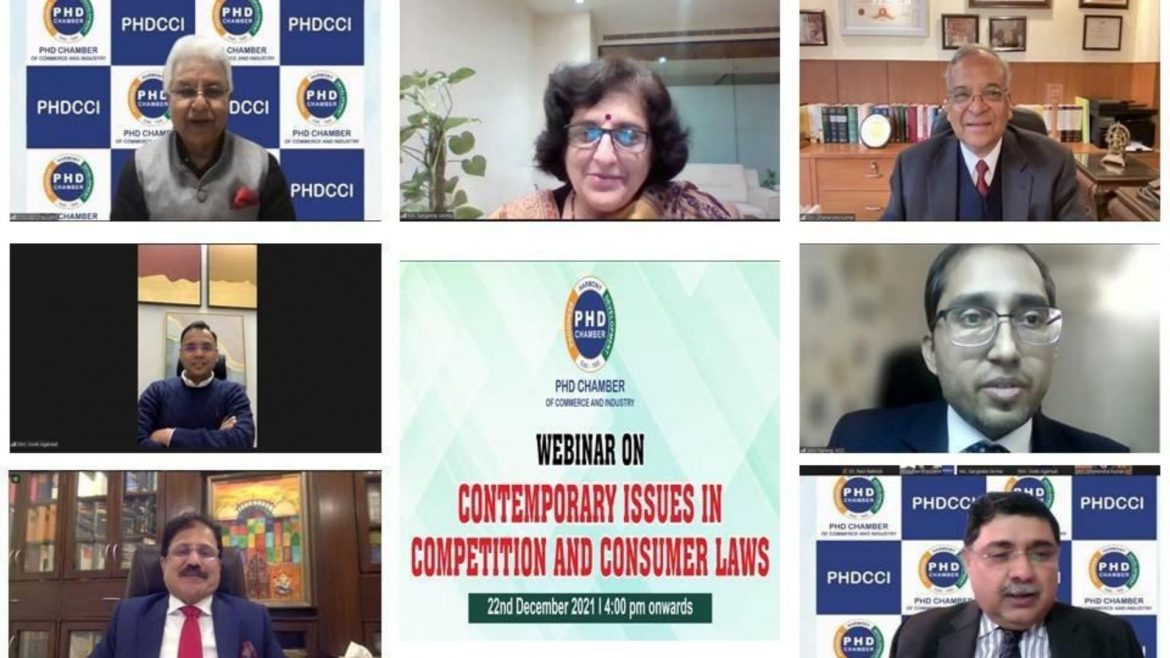 While welcoming the dignitaries, Mr. Pradeep Multani, President, PHDCCI said that Competition law is about making markets work better in order to deliver greater benefits to consumers. Mr. Multnai said that India became the first South Asian country to enact a modern competition law – the Cpetition Act 2002. He further shared that since governments are poised to support economic recovery through public funds in order to restore markets’ functioning and to maintain employment, competition policy should play an important role in the post COVID-19 context for the sound development of resiliency. Mr. Multani finally mentioned that, if proper checks and balances are not laid down and complementary policies are not in place, the growth, welfare and income gaps across countries may widen.

Ms. Sangeeta Verma, Member, Competition Commission of India said that CCI introduced a trust-based, Green Channel mechanism for deemed approval of combinations which has been hailed by the stakeholders as a progressive step. She further mentioned that during the last 12 years the Commission has been ensuring consistent, strong and credible implementation of law by focusing on the twin pillars of enforcement and advocacy. She has also said that digital modes of commerce made consumer more vulnerable to potential harmful effects of anti-competitive practices in digital markets and therefore, conduct of players in digital markets is also a high priority area for competition authorities. She further touched upon the role of anti-trust law in the context of the COVID-19 pandemic. She has also said that CCI recognises the economic distress brought about by the pandemic on the MSME sector, a sector that contributes significantly to the economy. She further said that the challenge in the implementation of competition law is to create a balance that incentivises innovation of the platform as well as their trading partners in digital world.

While mentioning about the Competition law, Shri. Dhanendra Kumar, Chair, Competition Law & Consumer Affairs Committee, PHDCCI and Chairman Competition Advisory Services (I) LLP said that competition law is a Law that promotes and seeks to maintain market competition by regulating anti-competitive conduct by companies which in-terms also described as a Law which makes the market work for consumers. He has also mentioned about three pillar of the law outlining the objectives of CCI as to prevent practices having adverse effect on competition to promote and sustain competition in markets, to protect the interests of consumers and to ensure freedom of trade carried on by other participants in markets, in India. He further briefed about consumer benefits by using Competition as a tool. He has also mentioned about the unique feature in the competition law as equal treatment of the private and public sector in the eyes of Competition Law.

Shri. Sahil Narang, Partner Khaitan & Co LLP, at the outset, touched upon the salient features of the Consumer Protection Act, 2019. He gave a brief background of the necessity for a new Act to keep pace with growing complexities in consumer disputes involving e-marketplaces, online aggregators, intermediaries, etc. He thereafter addressed the session on how the new Act addresses consumer concerns arising from technological advancements in the marketplace, removes logistical hurdles for the consumers while initiating action, and broadens the scope of grounds for which action can be initiated. He spoke about the constitution of the Central Consumer Protection Authority (CCPA), its relevance and powers conferred on it to initiate action to prevent or curb unfair trade practices and consumer rights violations. He concluded his presentation by speaking about the interplay between the Consumer Protection Act 2019, Competition Act 2002, and the Legal Metrology Act, 2009 and the need for synergy between authorities constituted under these statutes in the best interest of the consumer.

Shri. Sukumar Pattjoshi, Senior Advocate at Supreme Court of India & Vice President, Supreme Court Bar Association mentioned that around the colonial era, India saw emergence of many consumer centric laws such as the Sales & Goods Act 1930, Drugs and Cosmetics Act 1940, The Prevention of Food Adulteration Act 1954 and many more. All of these were set around the notion of safeguarding the consumer interests. However, the Consumer Protection Act 1986 brought a paradigm shift as it aimed to end the disparity between consumers and producers, in terms of knowledge and resources, consequently establishing equilibrium between both the parties for a safe marketplace for all.

While thanking all the eminent dignitaries Shri. Vivek Agarwal, Co- Chair, Competition Law & Consumer Affairs Committee, PHDCCI and Partner, DMD ADVOCATES, complimented the CCI for its agile approach in dealing with unique issues in these unprecedented times and appropriately adjusting its enforcement priorities. He also spoke about the CCI’s approach in dealing with MSMEs which were affected by the pandemic and balancing various considerations while dealing with digital markets. He closed the session by highlighting the CCI’s recent advocacy initiatives and vision to understand futuristic issues such as blockchains through market studies.

ALTBalaji’s producer Tanveer Bookwala spills some beans on the ‘Producer Lab’ series, a segment of the #ALTBalajiBingeFest in 2021