Upon returning from Israel 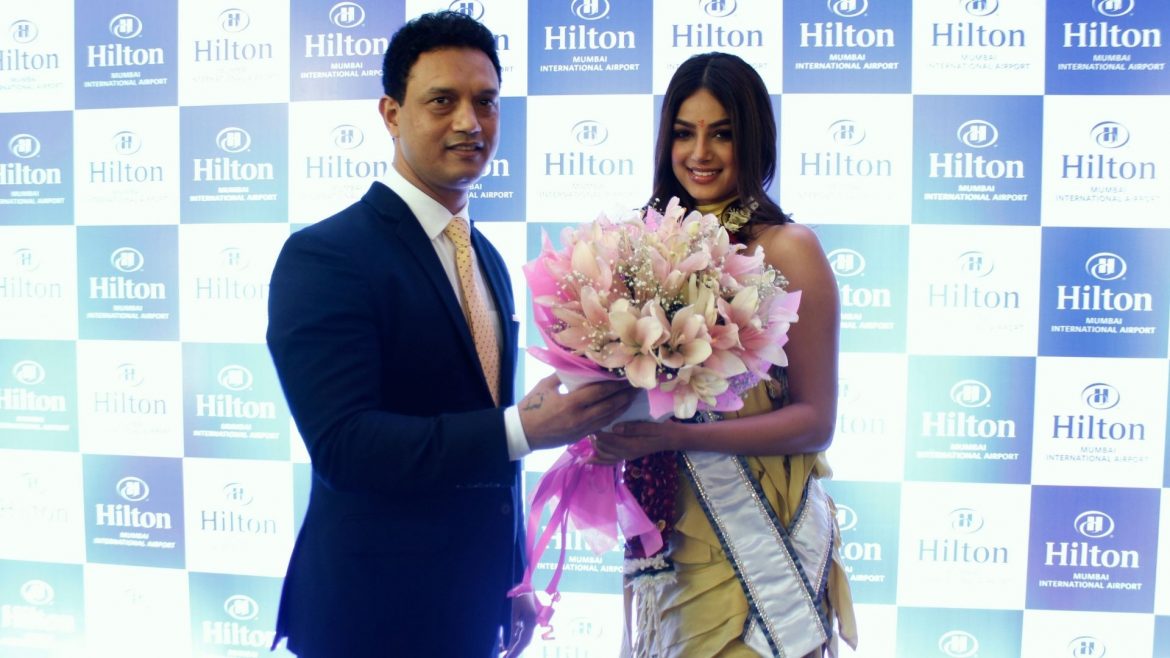 Mumbai, Maharashtra : Harnaaz Sandhu, the 21-year-old model and actress, was crowned Miss Universe in Israel on December 13, 2021, becoming the third Indian to win the title following Lara Dutta in 2000. She has previously been named Times Fresh Face in 2017 and Femina Miss India Punjab in 2019, and has received widespread acclaim for her grace and intellect on stage.

Upon returning from Israel, Harnaaz was under quarantine due to the COVID-19 regulations in India. Her first visit after her isolation was at Hilton Mumbai International Airport, where she had several interviews scheduled with various Indian media outlets and journalists alike.

Harnaaz  welcome at the property was done with utmost sincerity by the General Manager of the property, Mr. Deepak Kumar and the Commercial Director, Mr. Vipul Mishra. She was greeted with a traditional welcome of tutari and dhol tashe, followed by a welcoming aarti for blessings and best wishes.

To commemorate her success, the Hilton crew arranged a cake cutting ceremony as she entered the hotel lobby, following which she held interviews and media appearances with various journalists and publications in the executive lounge of Hilton Mumbai.

Harnaaz, during her interviews, remarked that she never planned on entering a pageantry industry and that it occurred by happenstance when she was 17 as she was inspired by Sushmita Sen, Priyanka Chopra, and Lara Dutta. She realised that, like the Bollywood actors, she wanted to be an inspiration to others. When asked about her future plans in Bollywood, during an exclusive interview with Times of India, Harnaaz stated that “I don’t know what would happen, because I am a person who never plans life. But given a chance, I would love to be a part of it, because that has been my dream. I am an actor by profession, I’ve done theatre from the last 5 years. I have a vision of influencing people and breaking stereotypes of what women are and what they can be, and that can happen through acting. Because in today’s times, people get so intimidated, so influenced by movies. That’s the way I can influence people and inspire them by following my passion, just doing the best for the society,”

Further to her interviews, Harnaaz and the Hilton team held a brief meet and greet session, which included a mini photoshoot as well. Following her commitments to the media and journalists,  Harnaaz and her family were invited to a private yet special dinner at the Brasserie, which concluded her first public appreacence in India after her triumph in Israel, with Hilton Mumbai International Airport.

Sandhu was born to Pritampal Singh Sandhu and Rabinder Kaur Sandhu in the village of Kohali in the Gurdaspur district of Punjab, close to the city of Batala. Her mother is a gynaecologist and her father is a realtor. Harnoor, her older brother, is her other sibling. Sandhu was born into a Sikh Jat family.

The family relocated to England in 2006, but returned to India two years later, residing in Chandigarh, where Sandhu grew up.

In Chandigarh, she attended Shivalik Public School and the Post Graduate Government College for Girls. Sandhu was pursuing a master’s degree in public administration before to becoming Miss Universe.  Sandhu speaks Punjabi, Hindi, and English in addition to her native tongue.

Sandhu was named one of the Top 50 semifinalists in Miss Diva 2021 on August 16, 2021. She was later confirmed as one of the Top 20 contestants for the televised Miss Diva competition on August 23. Sandhu earned the Miss Beautiful Skin title and was a finalist for Miss Beach Body, Miss Beautiful Smile, Miss Photogenic, and Miss Talented at the preliminary competition on September 22.

Sandhu, one of the top 10 semifinalist in the Miss Diva 2021 contest, said at the grand finale’s opening statement round:

“From a young girl with mental health issues who was bullied and body shamed to a lady who rose like a phoenix and realised her true potential.” From a lady who once questioned her own existence to a woman who aspires to inspire the next generation.

Paytm enables users to create their unique Health ID on its app, helps them access their digital health records instantly

Is it possible to use modeling to understand the transition to a circular economy better?