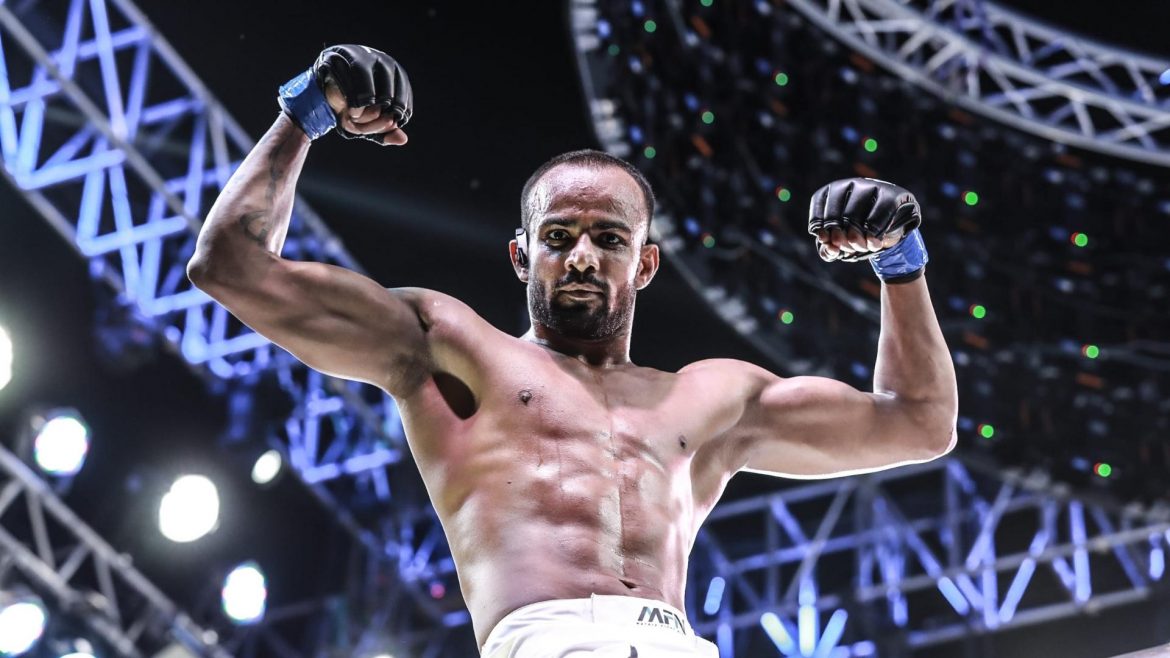 After three editions in the UAE, Matrix Fight Night returns to India with its seventh edition hosted in Hyderabad, and this time with international flavour

The “Afghan Lion” Abdul Aziz Badakhshi won in the main event of the night, defeating Brazil’s Marcelo Guarilha in the Featherweight category. With Afghanistan fans packing the stands, there was an almost home-crowd feel for the Afghanistan fighter.

The first round saw Abdul going for heavy punches, which Marcelo tackled with grappling and submission attempts. Both fighters started quick movements in the second round as Marcelo tried to go for a sudden takedown, but missed and Abdul landed in a few punches.

Abdul used his raw power to slam Marcelo on the ground and then ended the fight with heavy blows, winning the bout via TKO in the 2nd round.

“I am very happy about the win. At least with this win, I brought some happiness to the people back in my country, who have faced great hardships. I am thankful to everyone who has supported me in my journey. I miss my parents a lot, thank you mother and father,” an emotional Abdul said after his win.

In the co-main event, the decider in the trilogy between Sumit Khade and Dhruv Chaudhary in the Lightweight category, the Uttar Pradesh fighter took control from the get-go. Dhruv took down Sumit and started pounding him with non-stop punches and elbow strikes, leaving no choice for the referee to end the fight. Dhruv ‘Psycho’ Chaudhary was declared the winner via TKO, as he clinched the bout in just 3 minute 50 seconds.

Speaking on his big win, Dhruv said, “I feel great. This fight was supposed to happen in September. But it could not happen. This hunger to win only increased in last three months. I want to thank the MFN family for taking care of me like a child. I am really blessed I have these people surrounding me. The Psycho is back.”

In other fights on the main card, Angad Bisht defeated Chungreng Koreng via anonymous decision from the judges after a cagey fight. Bihar’s only professional mixed-martial-arts athlete Shyamanand demolished his Uttarakhand opponent Abhishek Negi, leaving him bruised and bloodied to pick a win via TKO in the Featherweight category.

‘The Cobra Queen’ Jojo Rajkumari left the crowd stunned after she defeated her Strawweight category opponent Ishika Thithe via submission with an armbar in just 1 minute 37 seconds of the first round. Coorg fighter Clinton D’ Cruz went past his Bantamweight category opponent Sahil Rana with an impressive win via judges’ verdict.

The fights in the Undercard saw two technical knockouts with the ‘non-musical’ Bon Jovi dominating Gajendra ‘Sniper’ Rawat in the Bantamweight category to pick up a big win, while Arshiyan Memon winning his debut professional bout against Bishwamitra Mayanglambam in the Flyweight category. Mandeep Prajapati defeated hometown hero Karan Singh via a split verdict.

Alan Fenandes, Director Operations, said that MFN has brought professionalism back to combat sports. “It was a fantastic night. The beauty about MFN is that you may lose once, twice, or thrice. But even if you lose, we will continue to give the fighters this platform to all the fighters till they go on to win here. What we have done with MFN is bring professionalism back to fighting. These fighters all know each other, train with each other. And what happens in the cage, remains in the cage,” he said.

An elated Ayesha Shroff added, “MFN 7 exceeded expectations in every way. This has been the best MFN so far. In my opinion, we have turned a page. Now it’s on to even bigger and better things.”

MFN 7 was held on December 10 at Taj Falaknuma Palace, Hyderabad, India and was streamed live on Book My Show.

MFN7 is being touted as a homecoming show for the much talked about and already established as India’s Premier Mixed Martial Arts Promotion.

A passion project of Bollywood superstar Tiger Shroff and fitness icon Sister Krishna Shroff MFN came back to another iconic location of Taj Falaknuma Hyderabad. MFN 7 brought together 20 of the top-level MMA athletes from across India and to add how MFN has spread across the globe, MFN 7 featured its first International Fight as the main event between Afghanistan vs Brazil.

Disclaimer: This news was shared to Prittle Prattle New via press release.

Gujarat tops the position as most resilient State in FY2021: PHD Chamber

01 year on from the insurrection, America feels more divided than ever Alex Marquardt,...

Devyani International Limited makes a strong debut on the bourses

Zoomcar expands to international markets – announces appointment of country heads in Egypt and...