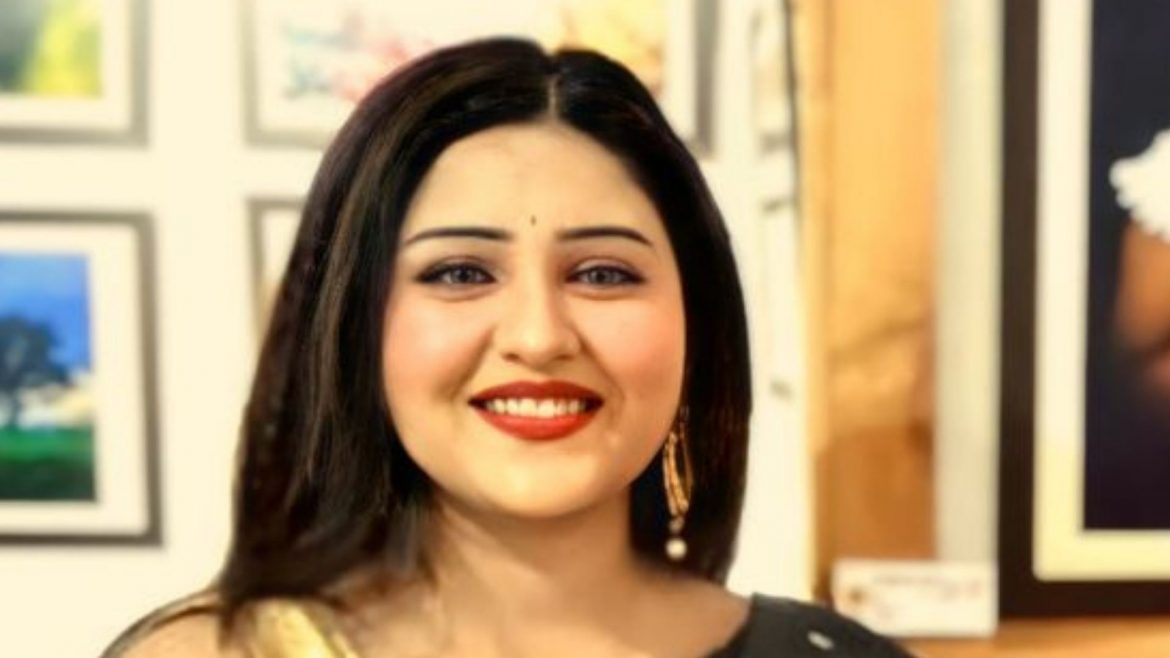 While a saree is considered to be one of the most versatile garments, most women wear the attire in  the traditional manner, The origin of the drape or a garment similar to the sari can be traced back to the Indus Valley Civilisation.  During the lockdown followed by unlocking, procedure facebook challenges have been ruling the internet.

Singer and Eminent Painter Soumita Saha opposed a challenge name ” #Saree_tei_naari ” which literally means Saree defines womanhood. Soumita opposed this idea claiming women who do not wear Saree  their womanhood cannot be questioned and stereotyping womanhood by an attire is not acceptable.  Soumita who calls herself a handloom gospeller takes the social media singing praise of saree… The young singer and songwriter doned ethnic outfit for her engagement ceremony.

Soumita who calls herself a handloom evangalist wore a handloom saree for her  engagement ceremony her Fiance was also spotted sporting handloom Kurta.  The young couple proved that they are flag bearers of handloom evangalist. The young Singing diva took the internet singing praise of the 9yards through multiple posts.  She added “The generation that kind of prepares itself to be in vogue every other no matter how bizzare the trending stuff can be rescued by sheer elegance of 9 yards only… ” In one of her post. Another post by Soumita says  “Dear western outfits,

Try all you want but I’ll never stop bringing out her true elegance.  ” Soumita is spotted wearing a beautiful red saree in the post.  The singing Diva gave picture courtesy to her Fiance Agniv Chatterjee. In a candid conversation, Soumita said ” I have inherited my love for saree certainly from my mother  and grandmother. The awesomeness of 9yards remains unmatched no matter what I wear.”

Soumita is currently busy working on her original compositions, she recently released her.Original Song Maahiyaa. IMDb officially recognised ‘Maahiyaa’ as a music video by independent Artist. Soumita’s own record label Melotunes was launched on September 2021, Maahiyaa got released from Melotunes.  She is gearing up to up with more original songs not only from Melotunes but other record labels as well.

Soumita grew up in Kolkata, West Bengal, with parents who worked in the Bengali film industry. Her father, Swapan Saha, is a well-known Rabindra Sangeet exponent, while her mother, Madhumita Saha, works as an entertainment critic. Bangla is her first language, although she now speaks English and Hindi. She graduated from St. John’s Diocesan Girls’ Higher Secondary School and then went on to Delhi University to study Architecture.

During her early days, she published a song based on Gajendra Verma’s Emptiness, which went viral on the Internet and helped her get fame. She has since appeared in a number of TV series, including Channel Vision’s Geet Sangeet and Rupashi Bangla, ETV Bangla, and OM Bangla Television’s Gaan Bangla Show. She’s also performed on Jadavpur University Community Radio and Big FM. Several small-screen playback offers were made to her.

Sahityer sera shomoy, a popular bangla series, featured the vocalist. She later made her worldwide debut with the EDM single Ishq, which was released by Big Tune Records in Miami. She has also sung in a number of Bangla films. She just recorded an item song for the film O my Love, which will be released in April 2020. Her contribution to Tagore’s songs is well-known. In 2019, The Aatman Audio released some of her Rabindra Sangeet performances. Soumita is a talented painter, and her works have been displayed in most of the country’s main cities as well as internationally.

Enchant Your Crush in Modern Ways with Key Methods of Casting Love Spells with...

Definition & Explanation of Emotional Cheating or Emotional Affair in 2022