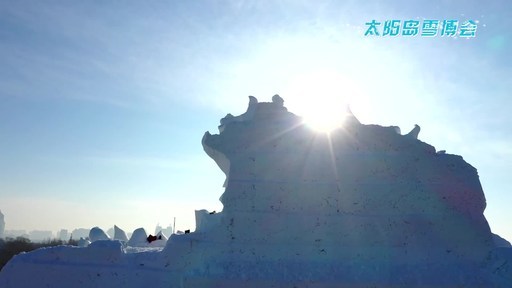 Over the past several years, Harbin, also dubbed the ice city, has been harnessing its unique “freezing” resources for development and witnessed thriving growth of the ice and snow economy. Statistics showed that during the recent three-day New Year holiday, the city’s 11 major tourist attractions received 530,000 tourist arrivals.

Internationally, it is generally believed that an economy is capable of supporting the development of ice and snow industry when its GDP per capita exceeds US$8,000. Ice and snow sports are thus considered “aristocratic games.” China may lag behind developed countries in professional winter sports, but the country has long seen a solid fan base for ice and snow sports in Harbin. As the matrix of Chinese ice lantern art, snow sculpture and ice and snow culture, Harbin held the first ice lanterns celebration in China early in 1963. It hosted the Harbin International Ice and Snow Festival, the first of its kind in China, in 1985.

In addition, many professional winter sports events have also been held in Harbin. Among them are the third Asian Winter Games in 1996, the Harbin 2009 Winter Universiade, the FIS Snowboard Half-Pipe World Cup, the World Championships of Snowboarding 2016, and five National Winter Games.

A 2021 report on the ice and snow tourism development in China released by the China Tourism Academy estimates that the 2020-21 snow season will see ice and snow destinations attract 230 million tourist arrivals and witness a total tourist revenue of more than 390 billion yuan (US$60 billion) given tourists’ demands and availability of high-quality tourist products and services.

Given its advantages in developing ice and snow tourism, Harbin has set the goal of building itself into a leading tourist destination for winter vocations. Wang Zhaoli, Party chief of the city, said to Prittle Prattle News by sharing a Press Release Harbin will tap into the potential of its ice and snow resources, expand cooperation and boost a higher-quality ice and snow economy in the next five years.